Picture taken from bernard-greentea.blogspot.com
It has long been known that the type of diet consumed by humans will affect the condition of our oral health. As early as in the 17th and 18th century, there were records of evidence linking diet to dental caries. Pierre Fauchard (1678 – 1761), a French Physician and Thomas Berdmore (1740 – 1785), a Dentist to King George III, both wrote about the adverse effects of sugar, tea coffee and sweetmeats on the teeth. (Anderson, Curzon, Van Loveren, Tatsi, & Duggal, 2009, p.41)

There is evidence that in Asians and immigrants to Europe, a higher intake of sugar-containing drinks, including milk, and all other sugary products, lead to higher caries levels. Bacterial plaque is the immediate culprit that causes caries, but its activity arises from sugary dietary intakes. (Sheiham, 2001, p.571)

1. Any food that contains sugar, such as milk, honey, sugar, tea, coffee, sweet meats and starch.
2. Drinks that contain acids, such as fruit juices and carbonated soft drinks. 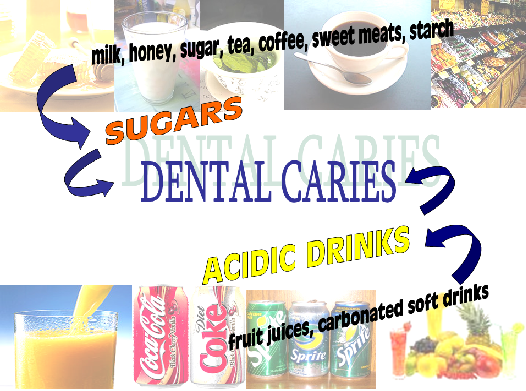 Diagram of causes of dental caries done by Substrate Group


Sucrose has been shown to be more cariogenic than other monosaccharides and disaccharides in animal experiments, where rats are infected with Streptococci mutans. However, there are also other forms of sweeteners that are linked to dental caries.
(Sheiham, 2001, p.582)

How does Sucrose and acids enhance the occurrence of dental caries?

1. Sucrose enhances the production of the bacteria, Streptococci mutans.

Figure 1. Transport of sugars through cell membranes, diagram from biochemsoctrans.org
2. When a diet consisting of a high frequency of fermentable carbohydrates is taken, the pH in the oral cavity will be constantly low, leading to the proliferation of Streptococci mutans. 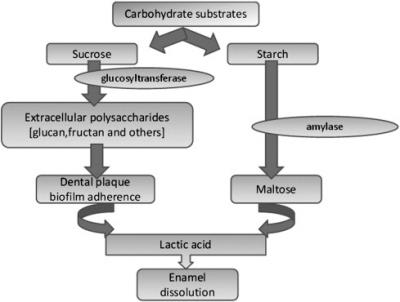 Figure 2. Flowchart of dissolution of enamel, taken from www.shockmd.com/wp-content/cariesfig.jpg

3. Soft drinks may contain multiple kinds of acids (including phosphoric acid and carbonic acid formed by dissolved carbon dioxide) that contribute to the low pH value.

5. This decrease in pH will usually be quickly neutralized by saliva so that within 30 minutes, the pH of the oral cavity returns to its resting levels.

6. This single acidic attack is minor, but multiple attacks due to frequent consumption of sugary foods will decrease the ability of the saliva to deal with the acid.

Saliva as a buffer system 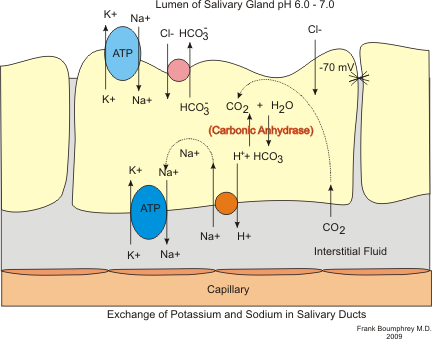 1. When food is ingested, the flow of saliva into the oral cavity increases. Saliva is produced by the parotid gland, the sublingual gland and the submandibular gland.

2. The increased flow of saliva will increase the amount of bicarbonate available for reaction with the increased H⁺.

3. H⁺ and HCOз⁻ will react to form carbonic acid, H₂COз.

4. The parotid and submandibular glands also secrete Carbonic Anhydrase, which is an enzyme that catalyzes the break down of H₂COз into H₂O and CO₂.

5. CO₂ is then removed by the lungs.

1. The critical pH of enamel is ~5.5 and therefore any drink or food with a lower pH may cause erosion.

2. Erosion reduces the size of the teeth and in severe cases leads to total tooth destruction.

3. A low salivary flow rate or buffering capacity is also a factor that exacerbates erosion.

4. The potential risk factors for dental erosion are changed lifestyles and eating patterns, with increased consumption of acidic foods and beverages.

5. Frequency of, rather than total intake maybe be critical in the erosive process. (Sheiham, 2001; Moynihan, 2002)

Other foods and their effects on the occurrence of dental caries:

1. Foods that contain little or no sugar are considered low-cariogenicity foods.

2. Finely ground and heated starch can cause dental caries, but this effect is much less compared to that of sucrose.

3. The degree of processing appears to affect the development of dental caries in rat experiments, where partially hydrolysed starch seems to increase the occurrence of dental caries.

4. Mixtures of cooked starch with sucrose are far more cariogenic than sucrose alone. Other substances like maltodextrins and glucose syrups all play significant roles in the occurrence of dental caries.


In countries where the populations consume large amounts of cooked starch and low amounts of sugar, the occurance of caries remain low. There has also been no correlation found between the intake of fruits and the occurrence of dental caries. (Sheiham, 2001, p.583, 585, 586)

Groups at increased risk of Dental Caries in relation to Diet

Protective factors and certain preventive behaviours are present in caries-free individuals, however, social, biological and dietary risk behaviours also have a large impact on the development of caries. In the following sections, we take a look at some of the significant groups of people.


1. Infants and Toddlers
(a) Dental decay in infants and toddlers are collectively known as early childhood caries, or nursing bottle caries.
(b) It mainly affects primary maxillary incisors.
(c) Night-time bottle feeding or prolonged, on-demand breastfeeding are thought to be the main causes. (Seow, 1998)
(d) Other sweet drinks given to babies in feeding bottles at bedtime or during the night are also associated with increased caries levels. (Wendt, Svedin, Hallonsten, & Larsson, 1995,1995)


2. Children and Adolescents
(a) Based on fluid intake data from the Third National Health and Nutrition Examination Survey (NHANES III, 1988-1994) (Sohn, Burt, & Sowers, 2006), children in the USA aged 2-10 years with high carbonated soft drink consumption were found to have significantly higher caries experience in their primary dentition.
(b) Those that consumed mainly milk, water, or juice was less likely to be associated with caries. (Sohn, Burt, & Sowers, 2006)
(c) A higher prevalence of caries can also be found among older children and adolescents and this is often a lifestyle factor influenced by the increased intake frequency of candy, soft drinks and snacks. (Flinck, Kallestal, Holm, Allebeck, & Wall, 1999)


3. Individuals with low socioeconomic status
(a) Poor quality diets have been associated with increased obesity in the US population, particularly in certain minority groups. (Flegal, Carroll, Ogden, & Johnson, 2002)
(b) Reisine and Psoter (2001), based on the findings from a systemic review, found fairly strong evidence for an inverse relationship between socioeconomic status and the prevalence of caries among young children.
(c) It has been shown that the frequency of soft drink consumption is a major determinant of caries experience in low-income African-
American adults. (Burt et al., 2006)


4. Elderly and medically compromised people
(a) In the elderly, higher rates of caries are often associated with medical issues.
(b) A change in the pattern of diet intake plays an important role in the treatment of many diseases.
(c) For people suffering from chronic renal failure, a low-protein diet must be followed and an adequate intake of non-protein calories must be
achieved.
(d) Low-protein and protein-free foods tend to be high in refined carbohydrate which will increase the cariogenic load.
(e) Patients requiring dietary energy supplements (eg. malnourished patients, patients with Crohn's disease) may have an increased risk of
caries as energy supplements are high in sucrose, glucose and other sugars.
(f) Sjogren's syndrome, which results in hyposalivation, often leads to an increased rate of caries formation.
(g) The rate of salivation is also referred to as the clearance rate - as it clears the sugars from the oral cavity.
(h) Studies have shown that slower clearance rates result in an increased risk for caries in the elderly (Hase, Birkhed, Grennert, & Steen, 1987) during artificially
induced low secretion rate (Lingstrom & Birkhed, 1993) and for individuals with normally low secretion rates. (Crossner, Hase, & Birkhed, 1991)


5. Athletes
(a) Specific dietary patterns and increased frequency of sport supplement drinks, often consumed during periods when lower salivary
secretion rates may occur, are to be considered as risk factors for dental caries and also dental erosion owing to their acid content. (Jaeggi & Lussi, 2006)


6. Work Environment
(a) Either the job itself or the work environment may promote at increased intake of fermentable carbohydrates.
(b) People who are working in the catering business or those in industrial food laboratories are at higher risk of dental caries due to frequent sampling of food.
(c) Work environments that increase the risk of dental caries include the confectionary industries or bakeries, where easy access to sugary foods promote frequent intake.
(d) People who are working night shifts or those with monotonous jobs frequently intake sugary products to keep them going.


7. Unhealthy Lifestyle
(a) Oral effects of the diet in relation to drug abuse are also well known. (Rees, 1992)
(b) A craving for sugars is felt soon after the intake of drugs such as cannabis and amphetamines.

Picture taken from www.healthy-lifestyle.most-effective-solution.com
(c) Certain drugs withh a sticky consistency may icnrease the retention time of sugars and many of them also cause dry mouth symptoms.
(d) All these lead to an increase in the occurence of dental caries.