The Specific Plaque Hypothesis proposes that out of the diverse microflora found in the oral cavity, only specific species are responsible for the formation and aggravation of oral cavities. (Loesche, 1976)

The Non-Specific Plaque Hypothesis states that plaque and caries are caused by the activity of all the plaque bacteria that collect on the gingival crevice and tooth surfaces in the oral cavity. These bacteria produce specific factors and substances that causes inflammation and damage to the gingival tissues. The quantity of plaque, rather than quality, is considered to be the deciding factor in the development of plaque and caries.

The ecological plaque hypothesis combined the key points in the Specific Plaque Hypothesis and Non-Specific Plaque Hypothesis (Marsh & Martin, 1999). This hypothesis states that Bacteria which are of the non-mutans species, such as Actinomyces, are crucial for maintaining stability and balance in the microflora community. Through the fermentation of carbohydates, these bacteria have the ability to produce acids which can cause demineralisation of enamel in the oral cavity. However, homeostasis mechanisms in the oral cavity are usually able to regulate the pH, returning the temporary drop in pH back to neutral pH at 7.0. Such pH cycle is common and naturally occuring in supragingival plaque (Takahashi, 2008, p414).

However, a change in the conditions in the oral environment(e.g decrease in pH of plaque) (Leeds Dental Institute, 2009) will disrupt the balance between the plaque and the oral cavity. Fig. 1 shows the how a change in the environmental conditions of the oral cavity could change the composition of microflora from healthy to diseased. As seen from Table 1, the different bacteria which can cause plaque and caries usually exist in small quantities that are relatively harmless in the oral cavity at neutral pH (Leeds Dental Institute, 2009) . When there is a large change in the conditions of the oral cavity, such as increased exposure to fermentable carbohydates and decreased salivary flow, non-mutans bacteria species will adapt by developing acid-producing and acidophilic properties, resulting in a drop in pH level in the oral cavity. Non-mutan bacteria species which thrive better in more acidic medium will therefore be selected for, and the microflora community will in general become more acid-producing. If such changes in conditions remain for a prolonged time, the bacteria which are more acidophilic and acid-producing, such as Mutans Streptocci and Lactobacilli Acidiphilic will replace the non-mutans acidophilic bacteria. This leads to an increase in the demineralization of enamel and acceleration of carious production (Takahashi, 2008, p414).

Therefore, non-mutans bacteria species are essential in maintaining the microflora community's stability. The development of acid-producing and acidophilic properties in non-mutans bacteria species is a major cause of disruption in homeostasis of microbacial community and regulation of lesion development. When such properties are acquired, the environment in the oral cavity is changed to one which induces the growth of acidophilic bacteria like mutans streptococci and lactobacilli, which further prevents to the restoration of the environment to conditions, e.g. neutral pH, which does not enhance caries formation (Takahashi, 2008, p415). 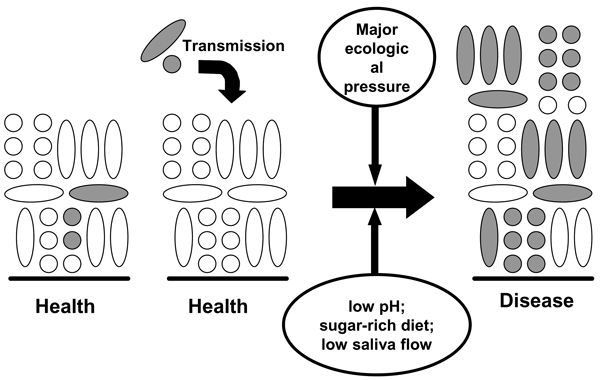 Fig. 1: Relationship between the microbial composition of dental plaque in health and disease. (Marsh, 2003)

1) The enhancement of certain types of bacteria in the oral cavity is directly related to changes in the environment.
2) Dental diseases do not have a cause. Any type of bacteria with similar physiological characteristics could be a factor in the process of causing caries and dental diseases.
(Marsh, 2006)
Evidence

Results from studies (Bradshaw et al, 1989) illustrate the effect of pH on the microflora community in a chemostat where the fermentable carbohydrate, glucoseis added supports the hypothesis. In a chemostat at neutral pH, the combined quantity of mutans streptococci and lactobacilli remained at around 1% of the total microbial. In another chemostat, where pH is a variable, a gradual increase in selection of acidophilic and caries-producing species was seen, whereas bacteria which were thought to be responsible for dental health in the microflora community is compromised. At the end of the experiment, when the final glucose pulse has ended, caries-causing bacteria species such as Mutans Streptococci and Lactobacilli composed of 55% of the microbial community. The experiment was then repeated, but with a decrease in pH controlled at pH 4.5, 5.0 and 5.5 in separate experiments. An analogous enhancement of the quantity of caries-causing bacteria species by compromising healthy microflora species was seen. Therefore, these experiments convincingly show that the decrease in pH due to carbohydrate metabolism, instead of the availability of carbohydrates, is the cause of a disruption in microflora homeostasis in dental plaque. Therefore, the data suggests that caries-producing microflora enrichment can be prevented if the pH of the oral cavity following an intake of sugar is controlled. (Marsh, 2003)

Fig. 2: The “ecological plaque hypothesis” and the prevention of dental caries. (Marsh, 2003)


Fig. 2 summarises the ecological plaque hypothesis and how prevent of caries might be carried out. Prevention of dental diseases and caries could be done by targeting not only the relevant bacteria, but also the environmental factors which may cause an enhancement in their quantities. Some preventive strategies are: