There are many different types of bacteria that can contribute to root surface caries. It is very important to identify the stage of lesion present on the investigated teeth, as it would correspond to the different colonies of bacteria present. Also, a unique bacteria flora exists for caries that are present on the roots as compared to the crown. (Banting D.W., 2001) Several studies have also indicated that the oral microflora can change with advancing age, introducing nonoral bacterial species such as staphylococci and enterobacteria, which are due to factors such as the impairment of the immune system. (Preza et al, 2008, p. 2015). An interesting point to note is that the root surface is more vulnerable to the demineralization process than enamel because cementum begins to demineralize at pH 6.7, which is higher than the enamel's critical pH of 5.5.

Root caries occur on the surface of the roots, and are more commonly found on the proximal surfaces (Fig 1) as compared to facial surfaces (Fig 2). ( Schaeken et al, 1991; Banting et al, 2001). 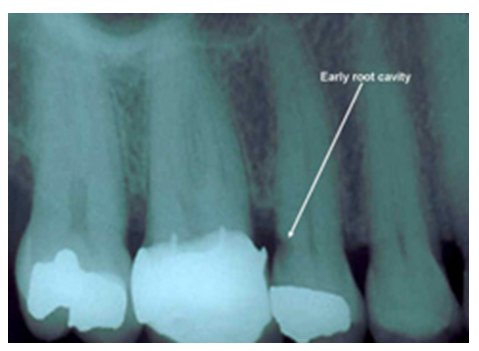 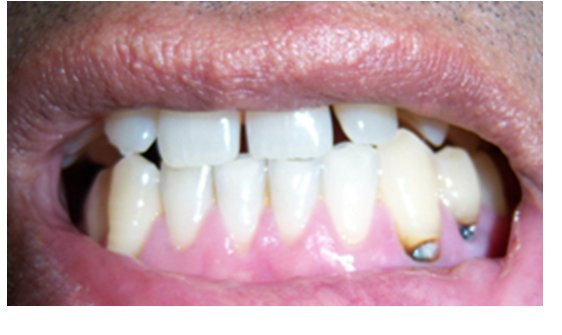 Fig 2. Photograph showing facial root caries in 33 & 34 (B. Gupta et al, 2007)
There are 2 broad classifications. Primary root caries occurs in the absence of a restoration while secondary root caries occurs adjacent to the pre-existing restoration. In developed countries where procedures such as scaling and root planning, which exposes the dentine, are fairly common, studies have shown that root caries are more likely to initiate from the dentine rather than cementum. Gingival recession and mechanical injury to the periodontium also play a part in exposing root surface to demineralization. (Banting D. W. , 2001) Root caries are especially prevalent in the geriatric population due to several factors which include (B. Gupta et al, 2007):

Abstract - In sound root surfaces, dental plaque contains a microbial ecosystem in which non-mutans bacteria (non-mutans streptococci and Actinomyces) are the primary microorganisms that help to maintain the stability of the tooth surface and keep the dynamic balance between demineralization and remineralization. However, in carious root surfaces, acid selection of low pH non-mutans bacteria aids in the demineralization of cementum. Once the acidic enviroment is established, mutans streptococci and other aciduric bacteria may promote lesion formation by sustaining the acidic enviroment. 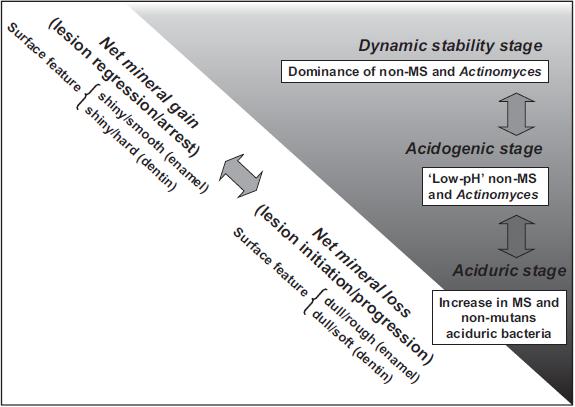 Explanation - Fig 3 elucidates an extended caries ecological hypothesis put forth by some scientists. They hypothesize that dental plaque is a dynamic microbial ecosystem in which non-mutans bacteria are the key players for maintaining stability. Homeostatic mechanisms in plaque help to maintain the stability of the environment surrounding tooth surfaces. However, when there is substantial increase in sugary substrates, the saliva becomes an ineffective buffer and causes a decrease in the pH of plaque. Under such conditions, the population of the 'low-pH' non-mutans streptococci and Actinomyces then increases via acid selection, leading to a shift towards more acidogenic microflora. This is the acidogenic stage which causes net mineral loss and initial lesion formation. If prolonged acidic conditions prevail, this will lead to an aciduric stage, in which more aciduric bacteria such as mutans streptococci and lactobacilli will prevail in the microflora. Hence, high proportions of mutan streptococci and/or other aciduric bacteria may be considered as biomarkers of sites that undergo particularly rapid caries development. This also proves the dynamic changes in the microflora as lesions progresses. (Takahashi & Nyvad, 2008, p 414)

The time line below elucidates the important findings pertaining to the microflora present in root caries:

1974 – Scientists confirmed S. Mutans as a significant component of the flora. Similarly, 11 strains of Actinomyces were identified. Besides the usual A. Viscosus(6 strains) and A. Naeslundii(2 strains), 2 strains of A. Odontolyticus were also identified. (Sumney et al., 1974)

1975 – Scientists underscored the difference in flora that could occur between the bacteriology of softened dentine, deep carious lesions and their samples of root surface plaque. They hypothesised that since A. Viscosus was the dominant species in plaque, it was also the main cause of root surface caries. They also suggested the role that S. Mutans could play in causing caries. Their studies identified a range of other bacteria in the lesions, including S. Anguis, Enterococci, Bifidobacterium( Actinomyces Eriksondi), A. Odontolyticus and Veillonella. There was little mention of Lactobacillus. (Syed et al., 1975)

1985 – Studies were able to conclude that root surfaces harbouring Lactobacillus and S. Mutans were predisposed to becoming carious and that people with both bacteria present in their plaque had an increased risk of developing root surface caries. (Ellen et al., 1985)

1986 – Scientists experimented with potentially cariogenic microorganisms, including S. Mutans, S. Anguis, S, Salivarius, A. Viscosus and Lactobacillus sp. They coded their root surface lesions as initial/ soft caries and advanced/hard caries. Their findings proved that there were significantly higher numbers of S. Mutans at the initial lesion sites. They acknowledged the fact that there was a potential for succession in the bacterial community as root surface lesions progessed. Interestingly, comparisons of the caries-free with the carious root samples showed that these caries-free sites had significantly higher numbers of Actinomyces than did root lesions. This was not consistent with earlier studies, which placed emphasis on Actinomyces as a primary cause for root surface lesions. (Brown et al., 1986)

1988 – Tests were able to affirm the correlation between the presence of both S. Mutans and Lactobacillus and the increased risk of root surface caries. Higher numbers of Actinomyces were found in subjects with the highest number of lesions. On the other hand, S. Sanguis was present in significantly higher proportions on sound roots than on carious surfaces. (Emilson et al., 1988)

2008 - Studies were done on to investigate the bacteria profile of root caries in elderly patients. They also tried to draw associations between bacterial communities of healthy and carious roots. They found that species of Selenomonas and Veillonella were common in all samples. The healthy microbiota included Fusobacterium nucleatum subsp. polymorphum, Leptotrichia spp., Selenomonas noxia, Streptococcus cristatus, and Kingella oralis. Lactobacilli were absent, S. mutans was present in one sample, and Actinomyces spp. were present in 50% of the controls. In contrast, the microbiota of the carious samples were dominated by Actinomyces spp., lactobacilli, S. mutans, Enterococcus faecalis, Selenomonas sp. clone CS002, Atopobium and Olsenella spp., Prevotella multisaccharivorax, Pseudoramibacter alactolyticus, and Propionibacterium sp. strain FMA5. The bacterial profiles of carious sample showed considerable subject-to-subject variation, indicating that the microbial communities are more complex than previously presumed. The data suggests that putative etiological agents of root caries included not only S. mutans, lactobacilli, and Actinomyces but also species of Atopobium, Olsenella, Pseudoramibacter, Propionibacterium, and Selenomonas. (D. Preza et al., 2008, p. 2015)
- In a separate study, it was proven that high concentration of mutans streptococci may be present on tooth surfaces without lesion development, and caries can develop in the absence of this species. [ Aas et al., 2008] Under such circumstances, it is suggested that acidogenic and aciduric bacteria other than mutan streptococci, including ‘low-pH’ non-mutan streptococci and Actinomyces [van Houte et al., 1996; Sansone et al., 1993] are responsible for the initiation of caries.

2009 - Scientists suspect that species other than Actinomyces and S.mutans may play a role as pathogens of root caries, and conducted tests to prove this. Several species were clearly associated with Control (healthy) subjects, including F. nucleatum subsp. polymorphum oral taxon 202, G.morbillorum oral taxon 046, C. sputigena oral taxon 775 and C. concisus oral taxon 575. No particular bacteria appeared to be consistently involved in the pathogenesis of root caries.There was no association between Actinomyces and root caries, which is in contrast to conclusions from earlier studies. Similarly, while certain reports have associated S. mutans oral taxon 686 with root caries, they realise that it may play only a limited role. Conversely, Lactobacillus spp. and P.alactolyticus oral taxon 538 were notably associated with most carious root samples. They also confirmed the presence of subject-to-subject variation concerning the microbial etiology of root caries — and that it does not just involves S. mutans oral taxon 686. (D.Preza et al., 2009, p 515)