The Specific Plaque Hypothesis attempts to explain the pathological effects of plaque formation in the oral cavity.

Plaque formation is caused by the colonization and multiplication of microbial species in the oral cavity. The Specific Plaque Hypothesis proposes the concept that out of the diverse microflora found in the oral cavity, only specific species are responsible for the formation and aggravation of oral cavities.

Certain species of microbes have been experimentally shown to possess a strong correlation with dental caries and lesion formation. Two such species are acid tolerating bacteria, Streptococcus mutans and lactobacilli which proliferate well in an environment where saliva is at a critical pH of 5.5.

A group of Japanese scientists conducted an experiment on rats, hamsters and mice in 1981 in order to find out the effect of certain strains of Streptococcus Mutans in the development of dental caries. Details of the experiments can be found in the associating reference. (Ooshima, 1981)

The conclusion of the experiment was that there were significant caries formation in the animals that were inoculated with specific strains of Streptococcus Mutans. Though the experiment does not conclusively highlight the validity of the Specific Plaque Hypothesis, it does pose significant evidence that specific strains of bacteria do indeed affect the progress of caries formation. (Ooshima, 1981)

Retentive sites on the tooth surface are recognized to be predisposed to decay, and research had shown over time, that cariogenic organisms, such as the mutans streptococci and lactobacilli, are selected for in these stagnant environments.

After a brief exposure to dietary sucrose, the plaque pH will quickly drop to about 5.0 to 5.5. While most supragingival plaque bacteria produce acid, they are less active at these pHs and may cease to grow. However, at this pH the tooth hydroxyapatite begins to dissolve (demineralization occurs), serving as a buffer which allows the mutans streptococci and lactobacilli, due to their aciduricity, to survive and their numbers to increase. If the demineralization process is not reversed by the remineralizing potential of saliva, the mineral lost from the tooth first appears as a white spot on the tooth surface and then progresses to dental decay. Thus, the caries process reflects a selection of plaque organisms that can survive in the low-pH environment occasioned by frequent access to sucrose.

The nonspecific plaque hypothesis was thus successfully challenged when studies in germfree animals showed that most acidogenic bacteria were not cariogenic, besides mutans streptococci and lactobacilli. (Loesche and Grossman, 2001) 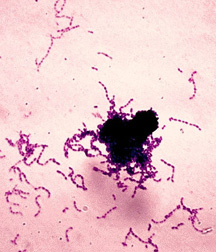 Streptococcus mutans was first described by JK Clark in 1924. Many strains were identified which were biochemically very similar but carried different antigenic markers. In total, 7 serotypes from a to g were described. Further studies had been also conducted which combined investigations of protein profiles of strains, structures cell organelles(ie. walls) and gross DNA composition proving serological findings that there were sufficient differences among the mass of isolates identified as Streptococcus mutans. From a large range of studies, the Streptococcus mutans isolates were then split into different groups with a number of distinct species, of which some were from animal and some human sources. The species of "Mutans streptococci" was characterized and created and the name Streptococcus mutans was retained to describe the most common of the two main human strains, the other being called Streptococcus sobrinus in compliance to standard nomenclature.(Newcastle University, 2009)


1) Streptococcus mutans is thought to be a primary pathogen in dental caries formation and aggravation. It's cariogenic properties is believed to be a main contributing factor to dental caries development. This organism is acquired during the early phase of a person's life but colonization does not occur until the eruption of the first primary tooth. Its colonization is observed in 20 percent of 12 to 16 month old children and is observed to rise to 25 percent in an inner-city population. Colonization can also occur in the furrows of the tongue.


2) Through research, S. mutans is shown to be capable of metabolizing sucrose with higher efficiency than other common oral bacteria. This shows that it might play a major role as it makes a recurring presence in caries-associated biofilms. As a large number of human diets consist of significantly large proportions of sucrose, especially in developed countries, S. mutans are thought to have a competitive edge in comparison to many other types of oral bacteria. Furthermore, S. mutans has the ability to speedily oxidise sucrose to lactic acid and this provides the bacteria with an extra mechanism for competition for survival among the many organisms also present in saliva, due to its comparatively strong aciduric properties. S. mutans' ability produce adherent glucan molecules from the metabolism of sucrose also enhances the attachment of these organisms to teeth. Therefore, bacteria lacking this element could possibly be captured by these glucans into a developing plaque. Thus it will be present in the highest concentrations on decaying teeth and in subjects who have lost teeth due to carious origins due to the production of acid by S. mutans which causes dental decay from demineralization of teeth. (Kuramitsu et al., 2007)


3) The omnipresence of specific bacteria such as S.mutans in biofilms shows that it has strong cariogenic capacity. One important trait that this bacteria has while others do not is the ability to produce bacteriocins.

Bacteriocins are proteinaceous toxins that have been found in all major lineages of bacteria. Unlike traditional antibiotics, they often have a limited killing spectrum and inhibit the growth of related organisms. By relating this to dental plaque, S. mutans strains have been shown to express a number of distinct bacteriocins, also referred to as mutacins. Of all the oral bacteria, streptococci have shown the greatest capacity for bacteriocin production.

S. mutans in particular, is capable of producing at least five different bacteriocins, mutacins I to V. Numerous studies have suggested that the mutacin activity of S. mutans might be an accurate explanation for its prevalence and successful establishment in the dental biofilm. A few of these bacteriocins can also suppress the proliferation of S. sanguinis strains, and these inhibitors may be responsible for the low levels of S. mutans. Thus, the expression of bacteriocins by some biofilm residents may determine which other organisms are coresidents in these structures. (Kuramitsu et al., 2007) 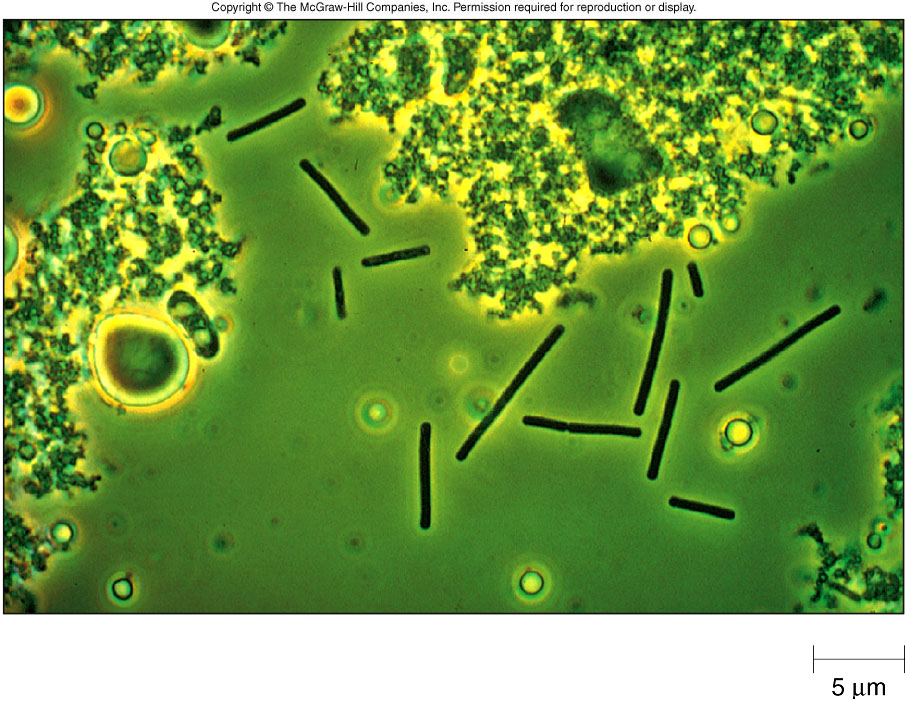 Although lactobacillus does NOT play a major part in initiation, it is very important in progression of dental caries.
When low pH is established in the oral cavity --> the number of lactobacilli increases and the number of S. mutans decreases
It also is unable to adhere to the tooth surface initially and form plaque. This is because it is dependent on extracellular polysaccharide (EPS) produced by mainly streptococci before it can colonize the tooth. Once lesions are established, lactobacilli will then contribute to the demineralization of the teeth.

1) One study exemplifies this. Sudden exposure of strains of oral streptococci and lactobacilli to pH levels between 6.0 and 3.5 results in the induction of an acid tolerance response that enhances the survival of these strains at or below pH 3.5. It also shows that strains of Lactobacillus casei were killed at pH 2.3 whereas S. mutans strains were killed at Ph 3.0. Lactobacilli has thus been found to be able to tolerate even more acid environments that S. mutans and therefore will be found for a longer period of time in biofilm. However, it can only colonize tooth surfaces after streptococci has colonized it to influence plaque formation.

The Specific Plaque Hypothesis hypothesize that specific micro-organisms are responsible for the formation and aggravation of dental caries. If the experimental results had indeed been conclusive, the hypothesis would have had the potential in providing therapeutic applications in dental caries prevention. However, therapy targetting the specific bacteria alone has not been proven very successful. Attempts have been made however, with variable results.

Specific strands of microbes responsible for dental caries formation and aggravation can be targeted and eliminated in order to prevent caries development. These strands of microbes can also be isolated for further research and studies in order for us to understand their properties. This will then allow us to target specific microbial activities that contribute to the formation of dental caries.

One way to target specific bacteria involved in caries formation as experimentally proven, would be to control the pH in the patient's saliva.


Two mixed culture chemostats were inoculated with 9 or 10 species (representative of those in health and disease) in a growth medium at pH 7.0 in which mucin was the main source of carbohydrate; under these conditions, S. mutans and Lactobacillus rhamnosus were noncompetitive and made up <1% of the total microflora.


Once the consortia were stably established, both chemostats were pulsed daily for ten consecutive days with a fermentable sugar (glucose). In one chemostat, the pH was maintained automatically throughout the study at neutral pH (as is found in the healthy mouth) in order to determine the effect of the addition of a fermentable sugar on culture stability, while in the other the pH was allowed to fall by bacterial metabolism for six hours after each pulse (as occurs in vivo); the pH was then returned to neutrality for 18 hours prior to the next pulse. Daily pulses of glucose for 10 consecutive days at a constant pH 7.0 had little or no impact on the balance of the microbial community, and the combined proportions of S. mutans and L. rhamnosus stayed at ca. 1% of the total microflora.

In contrast, however, when the pH was allowed to change after each pulse, there was a progressive selection of the cariogenic (and acid-tolerating) species at the expense of bacteria associated with dental health. After the final glucose pulse, the community was dominated by species implicated in caries (S. mutans and L. rhamnosus comprised ca. 55% of the microflora). When this study was repeated, but the pH fall was restricted after each glucose pulse to either pH 5.5, 5.0, or 4.5 in independent experiments, a similar enrichment of cariogenic species at the expense of healthy species was observed, but their rise was directly proportional to the extent of the pH fall.

Collectively, these studies showed conclusively that it was the low pH generated from sugar metabolism rather than sugar availability that led to the breakdown of microbial homeostasis in dental plaque. This finding has important implications for caries control and prevention; the data suggest that the selection of cariogenic bacteria could be prevented if the pH changes following sugar metabolism could be reduced. (Marsh, 2006)

There have been two main schools of thought on the role of plaque bacteria in the etiology of caries and periodontal diseases.

The "Specific Plaque Hypothesis" proposed that, out of the diverse collection of organisms comprising the resident plaque microflora, only a few species are actively involved in disease. This proposal focused on controlling disease by targeting preventive measures and treatment against a limited number of organisms.

In contrast, the "Non-Specific Plaque Hypothesis" considered that disease is the outcome of the overall activity of the total plaque microflora. In this way, a heterogeneous mixture of microorganisms could play a role in disease. In some respects, the arguments about the relative merits of these hypotheses may be about semantics, since plaque-mediated diseases are essentially mixed culture (polymicrobial) infections, but in which only a limited (perhaps specific!) number of species are able to predominate.

More recently, an alternative hypothesis has been proposed the "Ecological Plaque Hypothesis" that reconciles the key elements of the earlier two hypotheses. The data from the mixed cultures studies described above, and from other work, provide an argument for plaque-mediated diseases being viewed as a consequence of imbalances in the resident microflora resulting from an enrichment within the microbial community of these "oral pathogens.". Potentially cariogenic bacteria may be found naturally in dental plaque, but these organisms are only weakly competitive at neutral pH, and are present as a small proportion of the total plaque community. In this situation, with a conventional diet, the levels of such potentially cariogenic bacteria are clinically insignificant, and the processes of de- and re-mineralization are in equilibrium. (Marsh, 2006)

Beighton, D. (2005) The complex oral microflora of high-risk individuals and groups and its role in the caries process. Community Dent Oral Epidemiol 33: 248–55.